Can you change a judgment call when you kicked it and everyone knows you kicked it, but it’s not appealable? Should the umpire tell the coach he/she will not get partners together because this is judgment call and cannot be changed?

The first requisite of an umpire is to ultimately get all decisions correct.  Umpires are not to seek help on plays on which they are 100 percent confident in their judgment and view of the play.  Have the conviction to stay with a call that you believe was made properly. Going for help when you should not destroys the credibility of umpires and negates the value of a multiple-umpire system. Do not go for help to pacify a coach or to be a nice guy. This is a cop-out and is disrespectful for yourself, other umpires, the coach and the game itself.

Umpires are explicitly advised and strongly urged to seek help on the following:

If, after making your call and playing action has ceased, you are asked to get some help and you have doubt (e.g. a part of the play you did not see as clearly as you would have liked and could have missed a crucial element), then ask your partner for assistance.  Keep in mind that some calls cannot be reversed after playing action without creating larger problems like where to place runners and determining what would have happened had the call been different.

Any time you seek help from a partner, that partner must have been in a credible position to give your assistance with the call. The umpire whose call it was must be the one to seek help from a partner and has ultimate decision of whether to change the call or not. Rarely is there a need for umpires to come together and confer. Unnecessary conferences among umpires delay the game and cast doubt on the crew. Most requests for assistance from a partner should be out in the open, direct, and concise – “Jane, was the ball on the ground?”

Psychology of Asking for Help

Many times coaches really do not expect a call to be changed. But if they can get an umpire to seek help, they have gotten the umpire to admit doubt. Though the call may not be changed, the coach has set a precedent and will expect the umpire to go for help on all future requests. Because you went for help for one coach, the other coach will feel justified in expecting the same treatment.

Often a coach will say: “All I want is to get the call right.” That sounds reasonable enough but makes one wonder why we never hear a defensive coach complain when we call a runner out who is clearly three steps beyond the bag.

Coaches want the call to go in their favor. Their major interest is in winning and satisfying their own concerns. There is nothing wrong with this. They are doing their job. Umpires must be equally concerned with doing their job. After all, is not the coach’s statement: “All I want is to get the call right,” the same desire of every umpire.

Listed below are but a few of the reasons (they could also be called excuses) that officials don’t seek help from a partner or crewmate. There are probably more, but let’s address the ones that are generally accepted to be most common and consider some thoughts that might invalidate those reasons.

Reason 1: We don’t want to be perceived as being unable to make the call on our own.
It doesn’t show weakness to ask for help. On the contrary, it makes the crew as a whole look stronger. Unlike the whiners cited above, you will often hear commentators say, “I like to see this. Instead of standing by a call that could be wrong, they’re talking it over.” Crew meetings should be brief and few in number. But you shouldn’t hesitate to get information that could help you make the correct call.

Reason 2: After we confer, everyone connected with the team that didn’t benefit from the call will be mad at everyone involved in the decision, not just the official who made the original call.
If you base your calls on how players, coaches and fans will react, you’re in the wrong business. In the end, how you feel about the call is more important than how others feel about it.

Reason 3: If we confer and I change my call, the coaches will want us to ask for help on every close play.
Let ’em ask! Unless the rules of the sport you’re working mandate that you must get help when asked, you don’t have to grant such requests. Save your consultations for especially difficult plays or those in which circumstances didn’t permit you to see the play.

Reason 4: If I go for help and the other official didn’t see it either, we’re in deep doo-doo.
There will be times when a partner or crewmate can provide no help. If the rules of the sport specify a solution to such a situation (use of the arrow in basketball, a replay in volleyball, or when-in-doubt axioms), avail yourself of that method. If not, use the information you have at hand. Did the ball change direction, leading you to believe it was touched? Did the player of one team celebrate and the opponent appear glum? Sometimes your gut is more reliable than your eyes.

A final note: If you find yourself needing help once or twice a game, it’s time to brush up on your mechanics and positioning. The manuals are designed to put you in the best position to see most plays. Adjustments sometimes need to be made, of course. But for the most part, if you continually consult with your partner, the problem is likely you and not the mechanics. 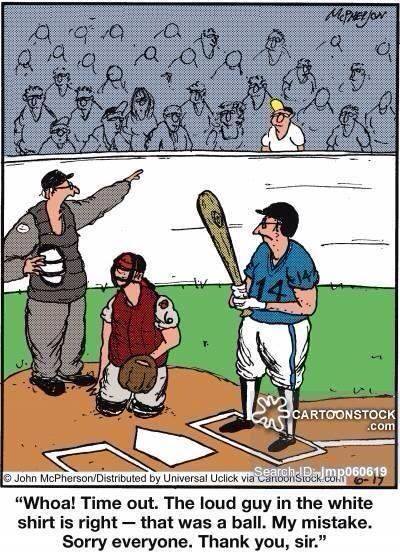 And a final, final note. If the game is televised and you catch it later, ignore the announcers. Invariably, according to them, you did the wrong thing even when you did the right thing for the game. If you don’t believe me, ask your partner.