Thanks to Will Macedo, Oscar Segura and Martin Vandenburg for their assistance in writing this article.

All defensive changes must be reported in college.  But what is a defensive change as compared to a defensive shift?  This is an important distinction, as the NCAA rule book has specific requirements for listing the defensive positions on the lineup card and even more detailed rules covering substitution and inaccurate lineups.

We can look at both the rule book and Case Book to assist us in this determination.

A.R. 8-3. The second baseman is located closer to first base than the first baseman who is playing in and away from the foul line for a slapper

RULING: They are not considered to have different defensive positions; however, if the catcher and first baseman exchange positions, they are considered to be unreported substitutes if the umpire is not notified (Rule 8.1.2).

A.R. 8-4. Has there been a defensive position change in any of these cases?

(1) The first baseman plays directly behind second base (up the middle) and the defense doesn’t position anybody in the first baseman’s traditional position.

RULING: (1) There has been no change. By rule, the first baseman can be positioned anywhere in fair territory. This is a positioning issue rather than a reportable change.

(2) This is an example of a change that must be reported – the first and third baseman have switched positions. If not done, apply the effect for Rule 8.1.2.11.

(3) This is a positioning issue similar to the first example rather than an exchange of positions.

Note: In the interest of accuracy and giving players credit for their play, it would be helpful if coaches always informed the umpire of positioning changes and defensive switches so there would never be a rule violation. However, by rule, coaches must only report the switching of defensive positions or substitutions that involve a player not currently in the lineup. 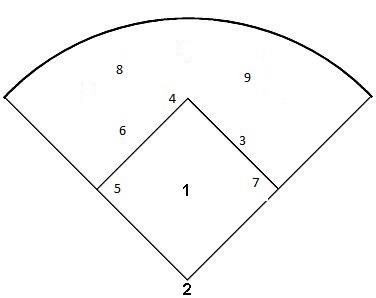 If the coach does not tell the umpire exactly where each player will be playing with regard to the position numbers, the plate umpire should tell the coach. “I can take these defensive changes, but we must have positions numbers for each of your players. Do you want to decide this?  If not, I will designate #7 as position 3, # 3 as position 4, #4 as position 8, and #8 as position 7.

It would be impossible to discuss every possible defensive alignment which college coaches may employ. Good lineup card management is part of good game management.  Using these examples as a guide, the plate umpire must use common sense and the intent of the rule to manage the differences between when: