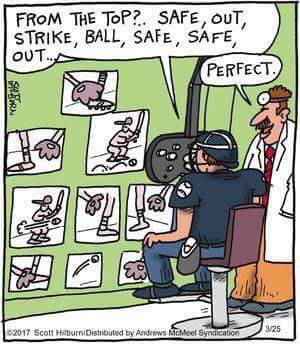 The first requisite of an umpire is to ultimately get all decisions correct. Umpire pride is important, but never as important as getting the play right. It is the philosophy of the NCAA that umpires always seek to get the call right. This may involve the reversal of a previously rendered decision. However, the correct decision, not the pride of any umpire, must prevail.

Overall, umpires are urged to seek help on reversible plays in which they may have erred by not seeing a crucial element of a play. Such meetings, while necessary, should be infrequent and not become a substitute for umpires seeking proper angles, exercising sound judgment, and having the conviction to stay with a call that an umpire believes was properly made.