The “stop sign” has been commonplace for many years in multiple sports, but feelings toward it have changed in recent years.  Should it be used in a college softball game?  The current thinking is that it can be an effective tool in your toolkit but must be used judiciously and at an appropriate time.  It may also depend on an umpire’s “relationship” with the coach. 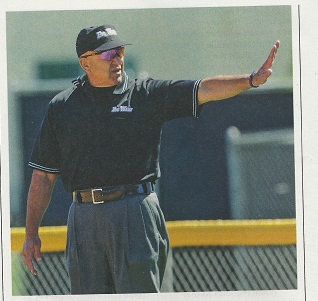 Although not listed in the CCA Manual as an official signal, it may be an effective tool if used with good judgment when deployed.  This non-verbal communication tool is controversial among our officiating peers – some umpires and sports think it should not be used whereas other officials and sports believe that it is a powerful tool.  NBA administration has stated that the stop sign used to be taught in the league’s officiating training program but…”That’s not in their toolkit now.”

Like all preventive umpire philosophy, showing the stop sign should not be overused or appear to be dismissive.  The way an umpire uses it is important and other factors come into play – your facial expression, the way you look at the player or coach, and whether you make eye contact or smile or frown.  Likewise, it may also matter how the player or coach approaches the umpire – in a peaceful manner (probably no need to use it) or running toward you while agitated (perhaps now).

Coaches are quoted in the Referee magazine article about this sign.

“I understood that when I saw that signal, I knew that particular individual had had enough of me.  Their cup was full (at that moment).  But I also knew that I could bring up another issue with him or her at a later time.  That signal I felt never hindered my ability to communicate a different issue.”

In the past Referee magazine has been a cautious proponent of the signal.  In a 2009 column it was noted that it could be used in a multitude of situations:

If it is used sparingly, the offender and others know that a warning has been given.  In the CCSUA philosophy of EWE (Enough, Warning, Ejection), this stop sign is the Enough step.  Here is a suggestion from an experienced NCAA baseball umpire for the situation of a coach chirping about balls and strikes:

If you find yourself using this signal a lot, then there may be a problem.  You have not done enough communicate to the coach.  Give a clear and decisive stop sign; do not make it a casual turn of your back or wave of the hand.  Ultimately, umpires need to apply to the stop sign the same thing that is applied to the use of other communication tools: good judgment.  It may be appropriate for some situations or only inflame matters.  There are different ways of doing things, and we need to use all the tools at our disposal.