Statistically, the first career call for any umpire working the bases will usually be a force play at first base. This call is a building block towards developing solid mechanics, so getting it right is extremely important. This call may also be the first impression that a coach will make of you, so it should be strong, given with confidence and look like a call an experienced umpire would make regardless of outcome of that call.

Current mechanics have increased the starting position depth to allow us to see within the cone of our focus – a calling depth of no closer than 18 feet is needed to see the ball as it enters the glove of a first baseman, even when glove is extended high above her head, while at the same time being able to see the batter’s foot touch the base and the ball into the glove.

All base umpires must pre-pitch the “ground ball to the infield” situation – outs, runners, infielders’ positioning. As contact is made by the batter, read the angle of the ball and the fielder most likely making the play. Start moving into the field of play attaining a distance of no more than 18’ from first base and an angle of 90 degrees to the angle of the throw, but staying within a 30-50 degree angle to first base. How far to move into fair territory is based on the need to create that 90 degree angle to the throw. See the player field the ground ball and track the throw until it gets to about 10’ to 15’ from the base.

A ball hit to the right side of the infield may require only one or two steps to attain the proper angle while a ball hit to the third baseman will require several steps to reach that 90 degree angle to the throw. Bunts and hits that have the catcher or pitcher fielding the ball may require movement to the maximum 50 degree to first base.

No matter if the play is routine or unusual, there are three things to keep in mind on every play at first base: First, did the runner make contact with the base? Second, was the first baseman in contact with the base when she secured possession of the ball? And third, did she field the throw cleanly? Now you are ready to rule on the play.

Once your calling position has been established and the throw is approaching first base, use the “flash technique” to improve your call accuracy. Focus on the throw until it is twenty to twenty-five feet before the base then flash your eyes, not to the glove but to the front side of the base that’s closest to home plate where the batter-runner usually first contacts the base. Your cone of vision will also allow you to see the throw hit the glove.

Your brain now needs to process the additional help you get from another sense – your hearing. This is the “snap/thud” technique. The sound of the ball going into the glove (snap) is louder than the batter-runner’s foot touching the base (thud). If the snap beats the thud, the batter-runner is out. However, before announcing the call, quickly focus up to the glove to ensure there is no juggling of the ball. Then make the out call.

F3 adjusts toward the outfield to take an errant throw

This slightly off-line throw by an fielder to first base can happen at any time and the umpire must be ready to make the adjustment. Read the ground ball off the bat and repeat your footwork to get in your initial starting position. When you are in the process of tracking the ball and realize the throw is going to take the first baseman toward right field, take a “read step” toward the first-base line to get an angle on the play. Why this movement? If the throw from the fielder is taking the first baseman toward the outfield, F3 will try to stay in contact with the base on the outfield side of the bag. When taking the “read step,” it is extremely important to stop moving and get your body and eyes set. You do not want to take the play while moving.

F3 adjust toward the plate to take an errant throw

Read the ground ball off the bat and repeat your footwork to your initial starting position. When you are in the process of tracking the ball, you realize the throw is going to take the first baseman toward the plate, take a “read step” toward second base to open your viewing window of first base. Again, when you take a “read step,” get your body and eyes set.

While in the process of tracking the ball, you realize the throw is going to be high and the first baseman will probably leave her feet to secure the throw and then make a swipe attempt at the batter-runner. Where do you go? Consider this – when a batter-runner realizes there is going to be a high throw, she normally stays upright and more than likely attempts to go to the foul side of the bag and then stab her foot to contact the base.

The first baseman, on the other hand, will try to swipe with a downward angle, and if she makes contact it is usually on the upper part of the batter-runner’s body, more specifically the helmet or the back. From your initial starting position, take a “read step” toward second base to open your viewing window to see the back of the batter-runner. You will have to keep in mind the following: Was a tag made? If a tag was made, did the fielder secure the ball throughout the entire process of the play? Did the batter-runner make contact with the base before the tag (one we too often miss, and call an out)?

Once in a while the throw to 1b is on line but too high, and F3 jumps straight in the air to catch the throw. 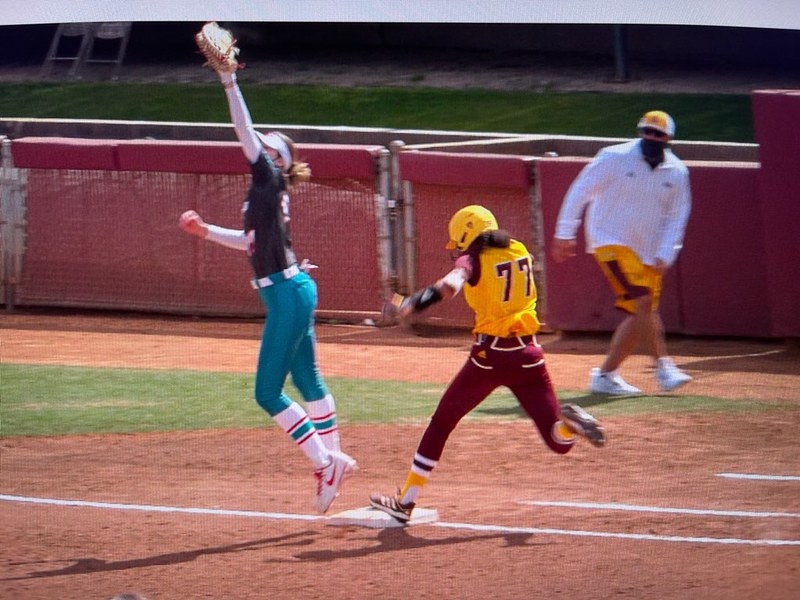 For this play you must keep your distance or move back – you need a wider view to keep all the elements in focus. As the picture shows, F3 will not attempt a swipe tag, but will instead bring her foot back down onto the base. This picture was submitted by an umpire who made an out call on this play; the umpire admitted that by moving closer to this play and focusing too much on F3 getting back on the base, it prevented the umpire from being able to see the runner touch the base before F3 re-contacted the base. Do not get “tunnel vision on this play by focusing only on the fielder’s action. Get in position to see all the elements (one of which is the batter-runner touching the base), slow it down, process what you see, then make the call.

When you are in the “A” position, you should take as many plays in fair territory as possible. However there are times when that is just not possible. Only then is it acceptable to go into foul territory. The CCA Manual give us this guidance: “You may use foul territory only if necessary.”

When a ball is hit to the second baseman or right fielder and she has to make a play toward the first-base line, that is called “pressure” from a fielder. In that case, it is acceptable to take very few steps into foul territory to make your judgment on the play. That will allow you to track the ball from the fielder and read the throw. You do not want is to be in fair territory and have a throw from the fielder hit you in the back. Get your body and eyes set and take a “read step” if you need it.