Reading a play to determine where the fielder will throw the ball is critical as it will allow an umpire to get to the best possible angle and distance to the play. This is especially important when an umpire has multiple bases to cover.

Read the play early and continue reading it until the defense makes a definitive move as to where the ball will be thrown. Continue to read the play as the play develops. Keep in mind whether the play will have one, two, three or four element plays – and always keep the elements in front.

Arrive ahead of the action and get to a set position. Always try to be completely stopped as the play happens. Give full attention to the play 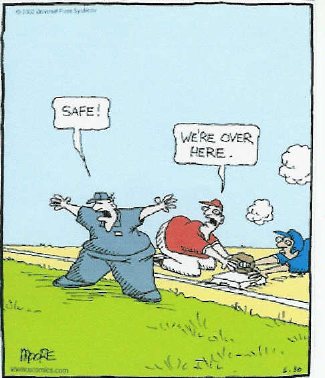 Elements of a play

We mentioned above that there may be anywhere from one to four elements to a play. Although the CCA Manual discusses the three-element and four-element plays, there can also be one and two element plays.

One element play
• A tag away from a base when the defensive player already has possession of the ball and during which the runner makes no attempt to avoid the tag; the only element is whether the fielder properly applied the tag
• A sinking fly ball or line drive; a catch or trap is the only element.

Two element plays
• A tag away from a base when the defensive player already has possession of the ball and the runner may run out of the base path; the two elements are the application of the tag and the judgment on the runner going out of the base path.
• A force play during which the fielder who already has possession of the ball, and runner are both trying to touch the base; although the base is a factor, it does not move. The umpire can focus on the base and watch the two elements – fielder’s foot and runner’s foot – to see which one contacts the base first.

Four element plays
One during which all of these elements are important – ball, defensive player, base and offensive player.
Runner stealing 2nd base – catch of the throw, application of the tag, runner’s foot touching the base, defender’s positioning (obstruction or not).