Applying substances directly to the game balls during the game is prohibited. Although a few rule books use the phrase “foreign substance” in their rule, the college softball rule book does not. Here are some examples from the Case Book which help to clarify what these substances may be – dirt, Turface, Gorilla Gold, mighty grip, cold, air, spray, and liquid products.

Any substance used in a game, whether considered legal or not, which transfers to the ball, including dirt and saliva, must be wiped off before the pitcher grips the ball. If the continual use of that substance defaces the ball, it should be removed from the game. Read the accompanying article, referenced above in the first paragraph, for a discussion specific to the pitcher using substances and wiping them off.

There is no reason for a defensive player, while holding the ball after a play and before throwing it to the pitcher, to go to the dirt and then directly to the ball. If you see this, or anything else which involves a defensive player doing something unusual to a game ball, investigate it immediately – no team personnel may apply moisture or any substance to the ball or into the glove that will contact the ball or do anything else to deface the ball.

This rule, substance on the ball, is one of the items listed in the article Be 100% Sure Before Calling These Violations. If you see something suspicious, make sure you saw what you saw, as the Effect for any violation after the initial team warning is an ejection of the pitcher. If you know it is illegal, handle it with the appropriate Effect and subsequent discussion with the head coach. If you are not sure, make sure – ask to see the ball, or the pitcher’s hands, or the item in her back pocket which she touches before every pitch.

• Substances that do not transfer to the ball (e.g. Gorilla Gold, mighty grip, cold, air, etc.) do not have to be wiped off.
• Can a pitcher use rock rosin as long as she wipes it off? No. Chemists claim this product will always leave residue, so the pitcher is not allowed to put rock rosin.
• Regardless of what product is used, umpires still have the discretion to not allow the pitcher to use any product that transfers a tackiness to the ball. 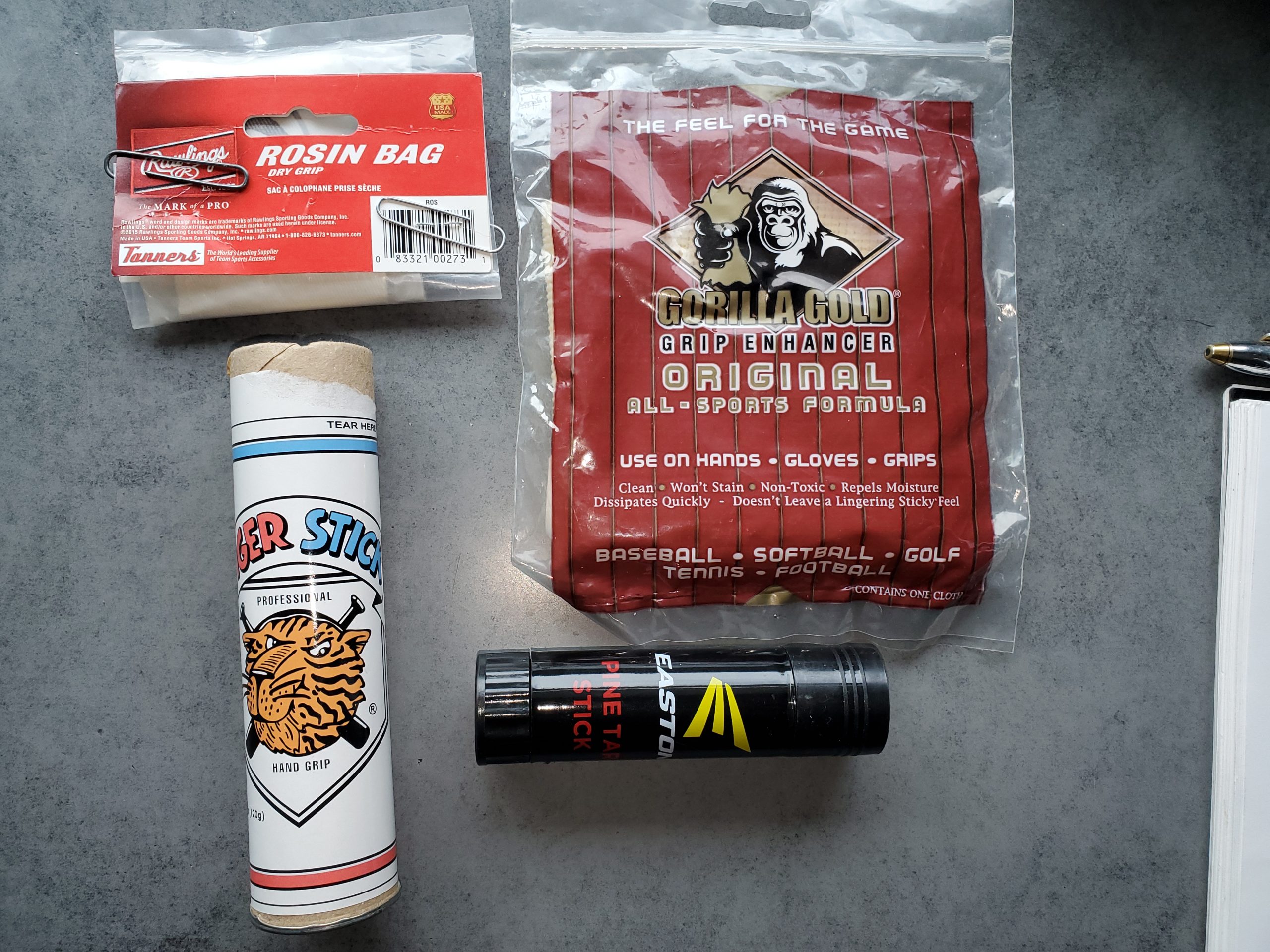 In both the college Rule book and Case Book, dirt is included in the substances that must be wiped off, along with saliva. Dirt is considered “not just dirt” because most college infields have been treated over time, perhaps due to wet conditions, with material that is not just dirt, for example, Diamond Dry.

Rosin bags are sometimes used by pitchers, although some rule books use the term resin while discussing the use of drying agents. What is the difference? Resin is a solid or highly viscous substance that is found in many plants and can be used as an agent to create crude turpentine. Many plants, particularly woody plants, produce resin in response to injury. The resin acts as a bandage protecting the plant from invading insects and pathogens. Rosin is the resinous constituent of the oleo-resin exuded by various species of pine, known in commerce as crude turpentine. Rosin is the solid form of resin and can be sold as a powder. It is extensively used for its friction-increasing capacity in several fields. Besides softball and baseball pitchers using rosin, it is used by gymnasts, rock climbers, weightlifters, violin players, and bull riders (additional grip on their rope).

Gorilla Gold is a product which is advertised as improving grip and eliminating slipping and over-gripping. It consists of all-natural resins and is a clean alternative to pine tar to control the amount of tackiness. It comes in towel form and is can be used on bats, hands, and gloves by batters, pitchers, and fielders. It is approved for Major and Minor League baseball. It is usually squeezed on a bat, batting glove, throwing hand or glove hand to get the amount of tackiness desired.
Turface, Pine Tar, Sunscreen, Resin
These are all considered foreign substances and cannot be applied to the ball. However, field dirt which may have Turface mixed in due to field maintenance for wet weather, may be used to rub up the balls prior to the game.

Prior to the game

The college softball rule book as well as the Case Book state that certain substances may be used to rub up the game balls PRIOR to the game to remove the manufacturer’s gloss. This is usually done before the umpires enter the field. The proper way to prepare the game balls before the game is to put a rubbing compound (dirt, Gorilla Gold, Turface, etc.) into the hands and rub it into the balls. If dirt is used, the balls should never be “scratched” into the dirt by holding them and, without rotating the ball, rubbing them with some pressure into the dirt.

Outside influences and pitches

We have discussed the variety of substances that might end up on a ball…how about when a bird or other “outside influence” contacts a pitch? You may think this is an impossibility, and we know of no occurrences of this during a college softball game, but it has happened twice in baseball.

There is no rule to cover this, either in baseball or softball. By rule it should probably be called a ball, as the pitch was released and did not enter the strike zone. It makes more sense to follow the lead of our baseball umpire brethren and rule it a “do-over.”