The college rule, unlike other codes, does not require a player to be occupying the on-deck circle. If it is occupied, it is restricted to the next batter only in the circle nearest her dugout. Warmup swings may be taken with not more than two bats:
• One or two official softball bats or
• One approved warmup bat that meets specifications or
• One official bat and on approved warmup bat

Unlike runners who may be called out for abandoning their base, the batter must continue to bat until the completion of her at-bat. If there is a mix-up in the count and the batter leaves the box to start towards, or even goes into her dugout for any reason (thinks it is strike three, thinks the fielder caught a foul fly ball), the rules allow the batter to be called back to the batter’s box with no penalty.

The batter is entitled to one unobstructed swing at each pitch from the time it leaves the pitcher’s hand until it is completely passed home plate or is contacted by the catcher; this includes a pitch which hits the ground before reaching the plate. The batter need not show intent to contact the pitch. If the bat contacts the pitch, even if it is out of the batter’s hands, or the batter is attempting to avoid a pitch, or the pitch hits the knob only, it is considered a swing. If the batted ball satisfies the fair ball rule, signal fair ball. This seems simple enough but…a few plays to illustrate some anomalies which may occur.

Play: the batter swings and misses the change-up; however, on her follow-through she contacts the ball which rolls into fair territory.
Ruling: dead ball strike; runners must return. If the contact is judged intentional the batter is declared out.

Play: Runner on second base with two outs. The catcher catches a swinging third strike, but the pitch is high and inside bringing her up and behind the batter. The batter’s swing is balanced and normal (although long) which causes contact with the catcher’s mitt (not the ball) and dislodges the ball causing it to roll away from the catcher. Is the correct ruling obstruction, dropped third strike or batter interference?
Ruling: The batter is entitled to one unobstructed swing, but only until the catcher contacts the pitch so once the pitch is touched by the catcher, the batter’s opportunity to hit the ball ended. The contact therefore is not the fault of the catcher, thus eliminating obstruction. It is not a dropped third strike as the catcher was prevented from holding on to the pitch. It is not batter’s interference as the situation says her swing was normal, indicating she did nothing to hinder the catcher. It is, however, a swinging strike and since it was her third, the batter is out. Now, live ball or dead ball? Since it was the batter’s action which dislodged the ball, and using the intent of the rule which states we hall not impose an effect on a team for any infraction when imposing the effect would be an advantage to the offending team…we should call a dead ball so no runners may advance.

This is such a controversial rule with many considerations, there is a separate article for it in this Rules Corner/Batting section – Batter hit by Pitch.

To quickly summarize fair/foul ball – a batted ball does not become fair or foul until:
• It stops or
• Is touched by a person or other object or
• Touches or bounds over first or third base or
• Initially hits the ground past first or third base
The key factor is where the ball is at the moment it meets one of these four conditions.

Fair ball
See the rule book for the actions which determine whether a batted ball is fair or foul. Most of them are straight-forward but there are a few anomalies.
• Unlike other sports, the relative position of the batted ball and the foul line, not the position of the fielder, when first touched determines fair/foul.
• A batted ball near a foul line may roll foul but could become a fair ball by rolling back into fair territory before it is touched, and it remains between home plate and the base.
• A batted ball should be declared a fair ball if it bounces over the base regardless of where the ball hits beyond the base. Beyond the base is determined by the baseline between second base and first/third base; use the front of the base for this determination.

Foul tip and foul ball
A foul tip should be ruled when the ball travels sharply and directly from the bat to the catcher’s hand or glove/mitt and is legally caught unassisted by the catcher. If it hits anything else before it touches the hand for glove/mitt, it is a foul ball. If somehow after hitting anything and then is caught by any other fielder, it is a foul ball. You may wonder how this can happen, but it has. For example, on an attempted bunt the ball ricochets off the catcher’s glove, hits the knee part of her shin guard and is caught in the air by the charging first baseperson. This is a foul ball. See the Case Book for other examples. 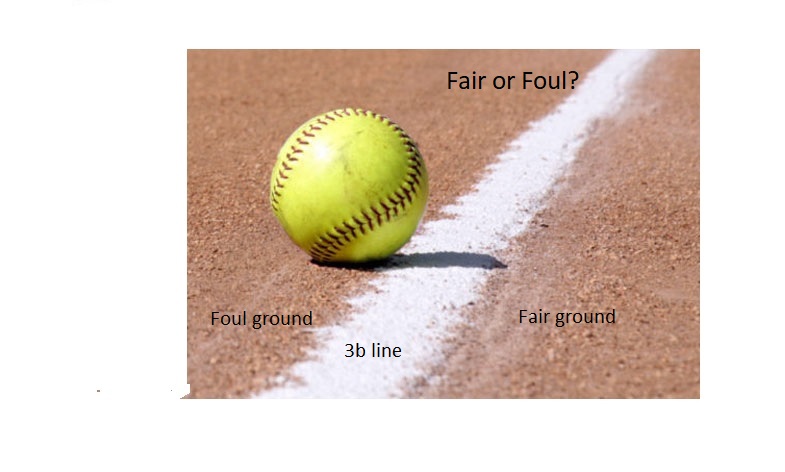 A hit is a legally batted fair ball including an unintentional contact with the bat, including a fair ball resulting from a check swing or avoidance of a pitch in which the bat contacts the ball. A bunt is a legally batted ball not swung at but intentionally tapped into the infield. The batter’s feet usually move slowly into an almost square stance and the bat is held in the path of the ball and moved very slightly.

A slap hit brings its own challenges. See the picture below; it appears to be a slap hit but a picture cannot tell the whole story. It could have been an attempt at a hit but then a check swing, or even a bunt if the batter had the intent to tap the ball. For this article, let us use it an instructional exercise in determining a slap hit. 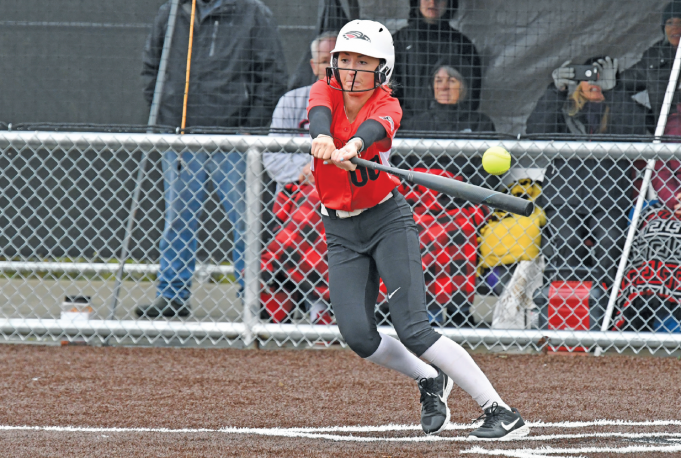 It is a slap hit if the pitch has been struck with a short, chopping motion or modified swing rather than a full swing. The batter might be slapping from her initial movement or she may set up in a bunting stance then pull back and slap at the ball. A slap hit could also result from the batter running toward the pitcher and taking a modified swing. We can also use the batter’s feet as an indication – different than a bunt, the feet will usually move with a few quick steps toward the pitch.

Why do all the umpires, plate and the base, need to recognize a slap hit versus a bunt? The first reason is that the plate umpire could be blocked from a good view of the batter’s actions because of all the moving parts involved with a slap – batter moving toward the pitch while plate umpire is tracking the pitch to the plate, and the catcher perhaps moving in an upward motion to get a jump on fielding the batted ball. An important second reason is based on the rules which come into play when there are two strikes on the batter – if the batted ball becomes a foul ball:
Bunt – strike three
Slap hit – foul ball

It is becoming more common for a defensive coach to argue that the batter’s action should be judged a bunt and not a slap hit, so that strike three can be assessed. Know the definitions for each of these and use the rule book language when answering the coach:
• Bunt – not swung at but intentionally tapped into the infield
• Slap hit – batted ball struck with a short, chopping motion rather than a full swing