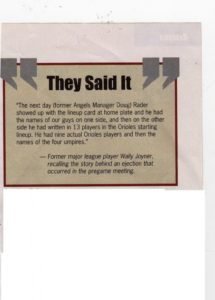 This happened in a Division 1 game.

An assistant coach got ejected for ranting and raving about a judgment call. The ejection was well warranted because of his “overboard” actions. There was no automatic suspension for this behavioral ejection, but he got worse than a suspension:

The ejected coach had flown his mother out to the tournament so that she could see him coach. After leaving the game he went to his car where his mother met him. It was observed that his mother was scolding him severely for his misbehavior. So instead of being in the dugout teaching his batters how to hit a nasty change-up, he sat out in the parking lot listening to his mother give him what-for.

Most of these stories are from our baseball brethren, but an ejection is an ejection. Although it can be a stressful situation, some humor can be found in some of them…Coach is mad at his team

“I remember a manager yelling and screaming and coming out and saying, ‘I have to get run,’” said umpire Ted Barrett, who has governed big league games for 19 years. “So I tossed him, and he starts ranting and raving about how bad his team is. ‘My pitcher is terrible. My bullpen can’t get anybody out. My hitters haven’t hit a ball out of the infield in three days. My clubhouse guys serve crappy food.’ And on and on.

“I started chuckling at him, and the guy gets up in my face and says, ‘Don’t you laugh. If you laugh, then they know this is all an act.’ So I did everything I could just to bite my tongue.”